The Hundred is one of the first exercises that people learn when practicing Pilates, and is oftentimes the exercise that begins most Pilates workouts. This detailed tutorial taught by Benjamin Degenhardt strives to make you think of the Hundred as an exercise to learn how to lift body weight against gravity, off of the Mat, and to build strength in the powerhouse to hold that weight. This tutorial explores why we do the Hundred, how to build strength to perform the exercise, Hundred modifications, the breathing pattern of the Hundred, and finishes with the application of the Hundred to the Reformer.
What You'll Need: Reformer, Mat

The Saw Up Close
More great information from Benjamin

Go to this Program Playlist
Benjamin Degenhardt teaches this tutorial on how to properly do the Hundred. Aug 29, 2014 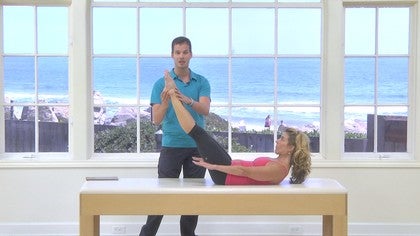 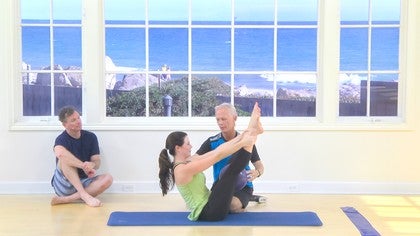 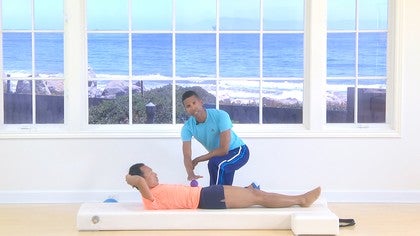 Jodi H
3 people like this.
I so appreciate these breakdown videos! I found the discussion about the exhale and the positioning of the head and neck really insightful. Also, a fantastic reminder that, while this movement is certainly challenging for the abdominals, it is an excellent way to learn to move through the center of the body against gravity, with stability. Thank you for sharing your wisdom, Benjamin.

Yugonda D
1 person likes this.
Truly great instruction and presentation ~ Thank You
Though serious about my work have never before seen this book cover :) Is it an original or very old Return To Life Through Contrology ?

Benjamin Degenhardt
2 people like this.
Thank you all for watching, I am so happy you enjoyed this tutorial! Please check out my blog post on the topic as well, for additional thoughts: //benjamindegenhardt.com/2014/08/29 /the-hundred-up-close/

Benjamin Degenhardt
7 people like this.
Yugonda - it is indeed an original copy from the first edition of the book. It's missing its dust jacket so all you see is the beige linen-bound cover, with the title embossed in red. Best part, it's actually signed by Joseph Pilates himself, in 1949. It goes with me everywhere I go.

Jennifer S
1 person likes this.
Love this breakdown....and your explanations of WHY and how this filters into the rest of the practice. Queston....as I understand it, tips of shoulder blades remain on the mat? Thank you & I am know going to search for a 1st edition!

Benjamin Degenhardt
Thank you Jennifer! Yes, tips of shoulder blades on the Mat is a good guideline. With the weight of the legs potentially feeling quite severe in this approach it is tempting to lift the upper body up higher - to level out. However, the challenge is to stay down, it's only the head and shoulders lifting up. Let me know how you get on, and good luck finding a 1st edition!

Julia H
3 people like this.
Excellent and clear tutorial. It has made me question the way I teach this exercise and was taught it (... to go into The Hundred from table top... and also lighten springs when doing the Reformer version). Am interested as to why people deviated from this traditional way? Your explanation to keep straight legs makes total sense - especially in preparation for some of the exercises that follow. Am going to try the one leg lift for 20 pumps with my beginners :)

Tracy M
3 people like this.
Thank you so much for this Benjamin. I love that teachers like you are taking us back to the origins of the Method. Looking forward to your workshop at the PMA!

Kathleen S
1 person likes this.
Your logic has taken me to a new place with The Hundred. More comfortable, with a different challenge focus.
Thank you.
Top Skip to Latest
Showing 1-10 of 40