How do you make modifications for people with osteoporosis without slowing down an entire class? Sherri Betz discusses the factors we need to take into consideration when designing an exercise program that is safe and effective for everyone, including those with osteoporosis. She talks about the difference between muscular strength and cardiovascular endurance, as well as how gravity can be used to help improve bone density.
What You'll Need: No props needed

Mat Workout
Challenge yourself with this Mat workout by Benjamin Degenhardt.

Mat Workout
Try this Mat workout with modifications for osteoporosis.

Go to this Program Playlist
This Video
Sherri Betz discusses the factors we need to take into consideration when designing an exercise program that is safe those with osteoporosis. Nov 11, 2016 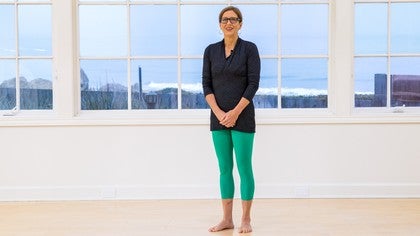 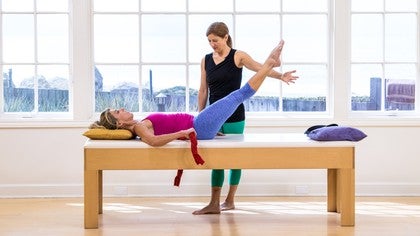 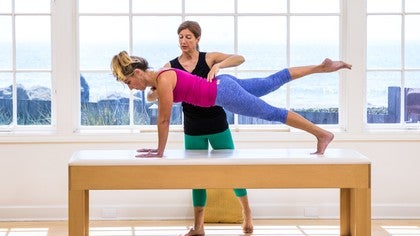 Lynn P
6 people like this.
Sherri, thank you for your clear, concise direction about Pilates in general and for osteoporosis. It's really good to hear the reference to Joe's work so that people realize it's not about contemporary vs classical, it really is about the roots of what Pilates is about.

Sherri Betz
3 people like this.
Lynn,
Your comment is very important to me. I am so glad that my respect for Joseph Pilates work came through and that it is not about contemporary vs. classical. It is about what is best for the client in front of us! Thank you, again, I am grateful for your feedback!

Laura G
1 person likes this.
I work Safe Spine Technique, which is based on sciense, on Dr. Mac Gill and Blandine Calais work, they are most important anatomist. We don't change the natural curves of the spine, and it's a very strong work doing very simply excercistes, I'm so glad to see your class, so happy to hear your recommendations.

Laura G
1 person likes this.
I completely agree with you

Marika Molnar
2 people like this.
Hi Sherri, thank you for all the wonderful information on your introduction video. Please take a look at the Tye4 BoneUp class that I teach for Osteoporosis prevention as it is mostly standing with wearable resistance and challenges not only the muscles but also balance and the brain. Also adding asymmetrical movement to the repertoire helps train for potential real life situations. Marika

Christina S
2 people like this.
We need this more in our Pilates world. This education is valuable for us and it is of extreme value to our clients.
I see many Pilates teachers still teaching exercises that load the spine when clients have mentioned on intake they have low bone density or osteoporosis. There needs to be more emphasis within the teaching institutions. Great job, Sherri! Thank you for your insight and education. Congrats on your award as well!!

Pandora Pilates
1 person likes this.
You're the best ????

Meg Fleming
1 person likes this.
Wonderful instruction, as always Sherri. Thank you for sharing your knowledge and insights with us. The way you explain gravity and weighted force as critical for increasing muscle strength and bone density is so helpful and important to remember. I hope we all learn how to articulate this to our own clients.
Top Skip to Latest
Showing 1-10 of 17