Focus on the thoracic spine function and mobility in this tutorial with Tom McCook. He starts by showing the basic anatomy of the spine so you can understand how each segment is designed to move. He then shares how you can use imagery, touch, and exercise to improve our posture for our daily activities.
What You'll Need: Mat, Franklin Ball, Magic Circle

Go to this Program Playlist
This Video
Focus on the thoracic spine function and mobility in this tutorial with Tom McCook. Dec 04, 2016 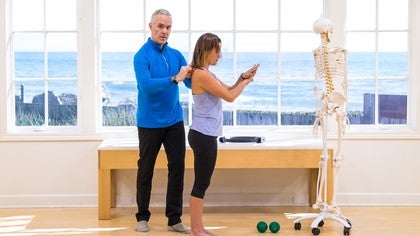 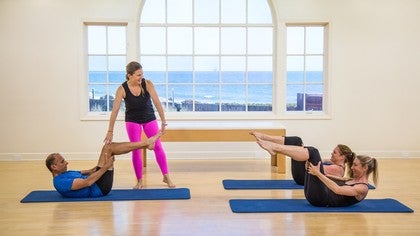 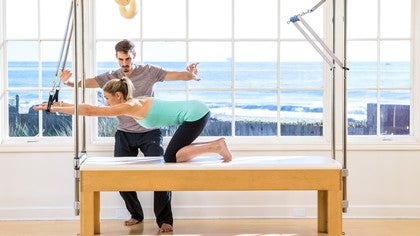 Andrea D
3 people like this.
Thank you very much, Tom and Sahra. I loved it! Big fan of your work, cuing, teaching tips, tutorials - fabulost information for myself and my clients!

Deborah Wasko
3 people like this.
Tom, this is wonderful information ! I really appreciate your teaching style. Thank you from Chicago :)

Or S
1 person likes this.
What a great class, Mahalo Nui !
There is so much useful information in here, I feel like I need to watch it again but wanted to show my appreciation.

Bobbie B
Awesome, I always learn from you??

Rosemary
1 person likes this.
Thank you Tom and Sara!
Have you had positive feedback with this work on your clients with scoliosis? Would appreciate any comments or precautions relating to scoliosis.
Terrific work??

Tom McCook
4 people like this.
Thank you for your feedback everyone, I really appreciate it. Rosemary, yes I have found this very helpful for clients with scoliosis. Learning the exact location and design of the spine, using imagery, touch and specific movements of the spine is very helpful. Precautions would be to encourage moving in a smooth, fluid way without forcing movement.

Alissa K
1 person likes this.
This was so informative! I love how cuing the natural design of the spine so simply gives such powerful changes to the body! Loved it! Thank you!

Tammy T
2 people like this.
Thank you, Tom. This is great information delivered in a simple, concise way. Thank you for making this available to us. Absolutely loved it.
Top Skip to Latest
Showing 1-10 of 49