There is a lot of information about the core that is getting us stuck in our movements. In this workshop with Lesley Powell, she talks about Pilates and embodied anatomy so that you can have a different understanding of the space within the body and the coordination of the body. By looking at the core as three dimensional, you will be able to understand how the body was designed to move.

- Learn how to use the transversus abdominis, multifidus, and obliques to help keep better alignment of your spine and ribs during movement

Suitable for all
(Pace N/A)
Nov 24, 2017
Balanced Body
Anatomy
(Log In to track)
Abdominals, Back

Embodied Anatomy Reformer
Apply the concepts from this workshop to the Reformer. 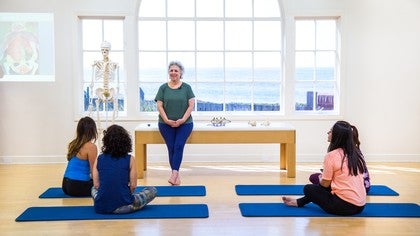 Sarah Edwards at Positive Pilates Solihull
3 people like this.
A very interesting workshop thankyou Lesley and one I think I'll come back to many times. I have been practising Pilates for around 6 yrs and at 49yrs qualified this year to teach (I teach in Higher Education in the 'main job')! Very interested in the Psoas and mind/body connection as having suffered from anxiety + sacroiliac pain for many years my osteopath soon taught me where my psoas is (and boy was it tight)!! Trying to instil the mind/body connection and address anxiety with my clients too. Loving your art also!! As a creative myself I can see these drawings on my studio wall (when I have a studio that is)!! With best wishes from the UK. Sarah

Sarah Edwards at Positive Pilates Solihull
1 person likes this.
Me again:) I thought the cues around pelvic tilt and the clock were really useful in terms of focusing on the spine, and also the 'eye' on the spine in rotation. Have you any advice for cueing during 'chest lift' as I find that with my beginner clients this is one particular area they use their shoulders and take tension into their neck? Also a question about cueing 'shoulders down'. I'm aware of the need to avoid flaring ribs etc but I do tell clients to bring shoulder blades 'back and down' in shoulder rolls etc. Is this best avoided? Thanks so much and enjoy your weekendxx

Lesley Powell
2 people like this.
The cue of shoulders of pulling down could be flaring the ribs. The Scapula needs to move depending where the arm is in space. Locking the Scapula too forcefully has affects on the core and the arms. The 3D core should be primary with the Arms as a reflection of the spine. Thanks so much for your comments

Sarah Edwards at Positive Pilates Solihull
1 person likes this.
Thanks so much Lesley:)

Lesley Powell
2 people like this.
You are welcome. thanks for watching!

ShiQing Fan
1 person likes this.
It's so challenging for someone has a strong old habit to find the new way doing  up stretch 😀，cool ！！！
Top Skip to Latest