Deborah Lessen's studio, Greene Street Studio has been at it's location officially since 1983. In this video, you will learn how Deborah started her studio with the equipment she had made, which eventually expanded over time. She also talks about the difficulties of having a studio at her home and how she was able to find a balance between work and life.
What You'll Need: No props needed 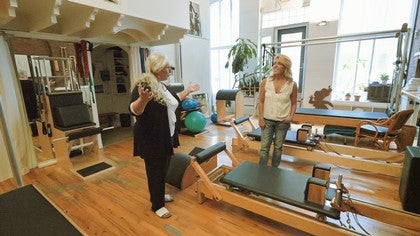 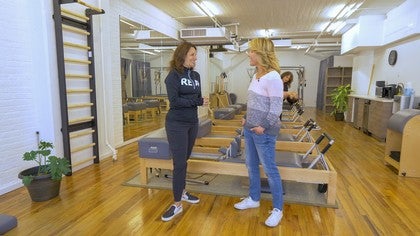 Julia H
2 people like this.
wow... SO cool to nosey around Deborah's studio! Thank you for sharing. Great questions from Kristy about home studio/life balance.

Ira R
1 person likes this.
Thank you...for the open house-studio, thank you for the open words... Thank you!

Ewa K
This is awesome

Thank You for sharing

Silke L
1 person likes this.
so lovely and so New York! Such an inspiration, thank You!

Leslie S
1 person likes this.
oh my! Deborah! what an inspiring space! Would be interested to hear when you replace the "original" copy of Carola's reformer, what will you replace it with?

Kristi Cooper
2 people like this.
The privilege of doing these studio interviews is not lost on me. I am very grateful to learn from all "Studio Tour" teachers in any capacity, but to see inside their daily practice in this way has taught me nuance I could never get in a class alone. Thank you (again) Deborah.

Denee D
1 person likes this.
Wow, Kristi you know Deborah is right when she says that if not for PA so many of us would not be exposed to the history, mind blowing teachers and genuine kindred spirits. Its so fun to go there with you too! How cool is that studio, in NYC! Thank you!

Sarah Edwards at Positive Pilates Solihull
1 person likes this.
Really fascinating thank you. Combining my love of houses with such knowledgeable and inspiring Pilates teachers - what could be better!! I feel I've found my vocation a little late in life (50 this year!) but I have found it none the less. Much love from the UK and hope you are recovering from the mudslides in CA. Sarahxx

Sharon B
2 people like this.
I love these extra features! Thank you for doing these! Kristi, have you done one of these on yourself? I would love to have you sit and talk about your beginnings with PA. As a Pilates teacher, I don’t know what I would do without you!

Heidi G
1 person likes this.
Thank you so much!! Loved this insight.
Top Skip to Latest
Showing 1-10 of 25