You will learn how to find a better connection to the serratus anterior with this tutorial by Lesley Powell. She uses vivid imagery to help you find the desired movement in the shoulder girdle when going into different weight-bearing positions. She also demonstrates how this connection will help solve the common issue of hyperextending the ribs.
What You'll Need: Mat, Foam Roller 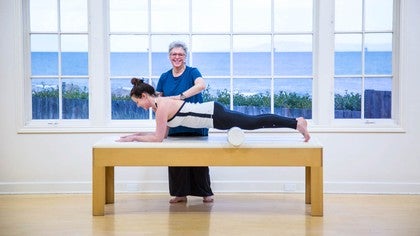 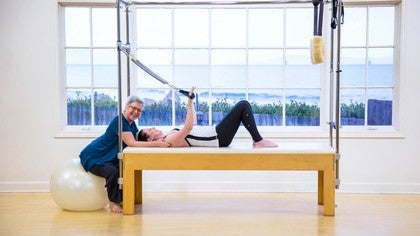 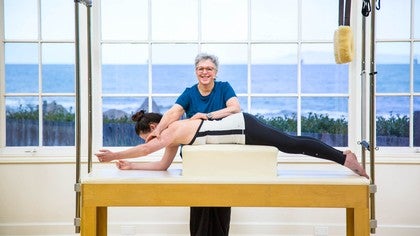 Ilja
2 people like this.
Thank you! very helpfull explanation

Holly H
These are such beautiful and functional explanations, Lesley. Thank you and keep them coming, please!

Paul P
Could you talk more about the lower 5 serratus and how they function  in the shift to down dog? Obviously, it's a complex tensegrity, but since the lower 5 aren't square to the  sternum like the upper 4 but point increasingly towards the navel, they'll have a different role... but what is it? Maybe  you've already done a turorial about that, which I haven't found yet. Thank you  so much, and especially thanks for the beautiful demonstration of the line in the upper ribs.

Lesley Powell
1 person likes this.
(Edited by Moderator - Ted Johnson on July 22, 2019)
The anatomy of the SA would indicate that the upper part of the SA (upper 4 slips) is best suited for scapular abduction or protraction movements. The lower part of the SA seems to be more suited for upward rotation of the scapula. The results of this study corroborate this premise. The 3 muscle tests, where upward rotation of the scapula was primarily resisted, were those that produced significantly greater EMG activity in the lower part of the SA as compared to the upper part.
https://www.jospt.org/doi/pdf/10.2519/jospt.2004.34.5.235

Theresa F
Thank you Leslye.   A great reminder for exercises which clients over use traps and lats.  Look forward to the other two videos.

Mj
1 person likes this.
Thank you, Lesley.  This information is life changing to someone who has struggled unsuccessfully with the “get your shoulders down” cue for years.  This way of stabilizing the shoulders helps with everything on the reformer.  I felt so flat lying on the carriage when I prepared for short spine massage that I thought I’d left my headrest up.  I hadn’t.  My shoulders and upper back had flattened and widened that much!  I felt my abs more in several exercises most notably knee stretches.
Could you please teach a reformer class focused on the shoulders and Serratus anterior?  It’s my new favorite muscle.  Thanks so much!

Lesley Powell
2 people like this.
Stay tuned. There is a reformer class based on this material. It will up soon.

Filippo F
absolutely loved all of this

Naschi
Love the tutorials. Can’t wait for the reformer class on SA
Top Skip to Latest
Showing 1-10 of 19