Gain awareness of where your head is with this Mat workout by Cara Reeser. She uses the concepts from her tutorial on the cervical spine so you can feel these techniques while you are flowing through a class. She encourages you to think about your relationship between the crown of your head and space so you can be in good alignment while you are supporting your head in each movement.
What You'll Need: Mat, Towel

Where is Your Head?
Bring your neck into full expression with this tutorial. 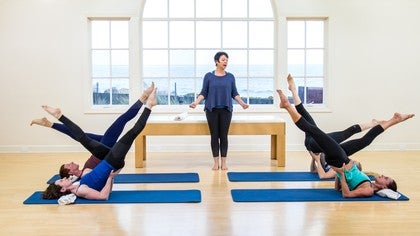 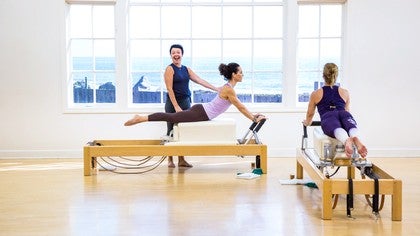 Deborah Wasko
3 people like this.
Cara !!! this class is full of incredible information ! I love your teaching personality :) thank you !! Cara will you be teaching at Pilates on Tour in Chicago ?

Elizabeth B
1 person likes this.
such great work, in the middle of the class I felt like my neck was 6 inches longer and by the end my head felt like it was floating with no effort to keep it up:)

Cara Reeser
Yes, I will be at Pilates on Tour Chicago hope to see you then.

Deborah Wasko
1 person likes this.
Really looking forward to it Cara ! Thank you for responding :)

Megan Macgregor
2 people like this.
I sang 'thank you' from the top of my head at the end Cara. The crick in my neck has gone and as I type this I am honouring the curve in my neck.

Such profound work but explained so clearly that it seemed so simple - this is the hallmark of tge truly gifted teacher that your are.

As an aside I love that you honoured and thanked your yoga teacher - I have learned so many things from my Hatha and Iyengar yoga teachers too. In fact I had some really wonderful transformation moments recently watching James Boag on Yoga Anytime re cervical and thoracic extension.

This is the work that we all need to do but most won't until pain intervenes. In your honour I'll be offering this up to my classes next week.

JV@PCNX
1 person likes this.
Thank you Cara! I taught some of these exercises in my Mat class this morning and already received a thank you from one of my students saying she hasn't had her neck and shoulders feel this great in a long, long time! Thanks for sharing a new perspective on the cervical spine! xo
Cara Reeser

Sharon C
1 person likes this.
Absolutely loved this class, we really need time to break excercises down and practice, and as you say acknowledge where we experience limitations. Thanks

Tova A
Fantastic in all ways. Cara Reeser you are a pleasure. Thank you

Bonnie L
1 person likes this.
This awareness just brought my mat work to a new level. My roll up has never been better. Much love and thanks!