You will have a feeling of elegance after you learn Kathy's Song with Blossom Leilani Crawford. This is the heart of Kathy Grant's work, and it features visualizations to help you become strong and centered. Blossom explains all of the parts of the song, and then she shows how to use it in context. By understanding how to use what you need, you will create a 3-part harmony with your breathing, spinal articulation, and Kathy's Song.
What You'll Need: No props needed

Go to this Program Playlist
"Get your song on" in Cara Reeser's tutorial designed to show how her mentor, Kathy Grant, advanced her students with the Spine Corrector. Oct 13, 2014

Kathy's Cats
Blossom L.
Tutorial
15 min
Pilates History
#1940
This Video
You will have a feeling of elegance after you learn Kathy's Song with Blossom Leilani Crawford. Jan 11, 2015 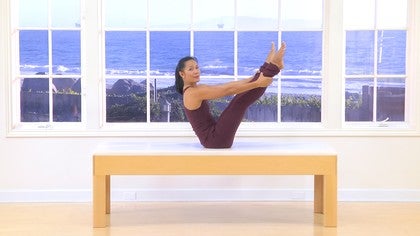 Yoly N
Thank you for giving your interpretation of how you think of each part of the song. It made it so much more meaningful!

Belinda P
Wow! Thank you Leilani, this is a wonderful, visual. It will help me in my classes.

Lisita Bonita
I love this :) Thank you for sharing!

Florence P
Thank you Blossom Leilani Crawford Love. I think that you should add Love to your name . Great loving Tutorials!

Jon H
Thanks for sharing Blossom. Your love for Kathy really shines through.

Lynn G
Lovely to hear your passion and admiration for Kathy - it really shows through. Very simple cues that are super useful. Thanks.

Sabrina Horak
Thank you so much for sharing the song with us!
Top Skip to Latest
Showing 1-10 of 28