You will work your glutes in this fitness-inspired Mat workout by Amy Havens. She teaches the final class with her peach pants, using Pilates intelligence to guide each movement. She starts by opening your hip flexors so you can find a release before awakening your lower body.
What You'll Need: Mat, Towel, Reformer Box

Jump Board Flow
Work on finding the power of your jump with this Reformer workout. 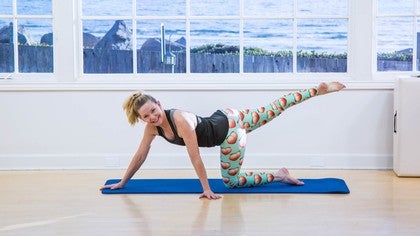 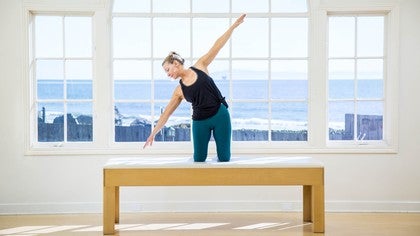 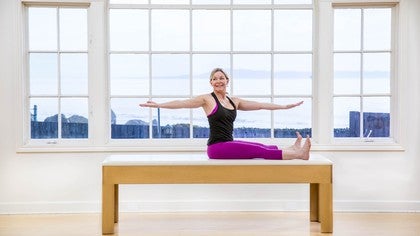 Kandie A
3 people like this.
Excellent! This is a good glute, hips, and balance challenge but felt like a full body workout. Thanks, Amy!

Lori M
1 person likes this.
Super fun, loved this, Amy. So nice to be taught instead of teaching. Thank you!!

Birgit N
4 people like this.
I love this workout and I really like Amy's personality, her teaching style, her sense of humor! I especially love your words about "Pilates Intelligence. Often as a teacher, we repeat all those little cues about control, flow, navel to the spine, scapula alignment etc. etc and it feels like an endless repetition. Therefore I will from now on also summarize it (especially with my intermediate clients). I really liked your variations - will also implement it in my workouts and in the work with my clients. Thank you!

Connie M
1 person likes this.
Being a fitness girl first (prior to my love of Pilates) I just love this style of workout! I was just reading an article about “dominate butt” syndrome. Yes, it’s a true syndrome in today’s world! Thank you Amy.. love this! And did I hear you say massage......ahhhh

Hilary F
1 person likes this.
Just what I needed after a 3 hour car trip!!!

Lina S
1 person likes this.
Thank you Amy for this workout. We never work enough the glutes!
I have a question on one of your exercises (it starts around 20:03). Why are we taking this position apart from challenging our balance? Is the side bend supposed to increase the work in the glutes? Thank you in advance for your answer.

Emfortee
1 person likes this.
WOW! i know i have to work on my glutes (physio) - and this is the Best class! I shall be doing this OFTEN! The exercises are so much more effective than others...thanks so much for the challenge!

Sarah Edwards at Positive Pilates Solihull
1 person likes this.
Thanks Amy - such creative teaching and much needed glute work:)!! Sarah
Top Skip to Latest
Showing 1-10 of 71